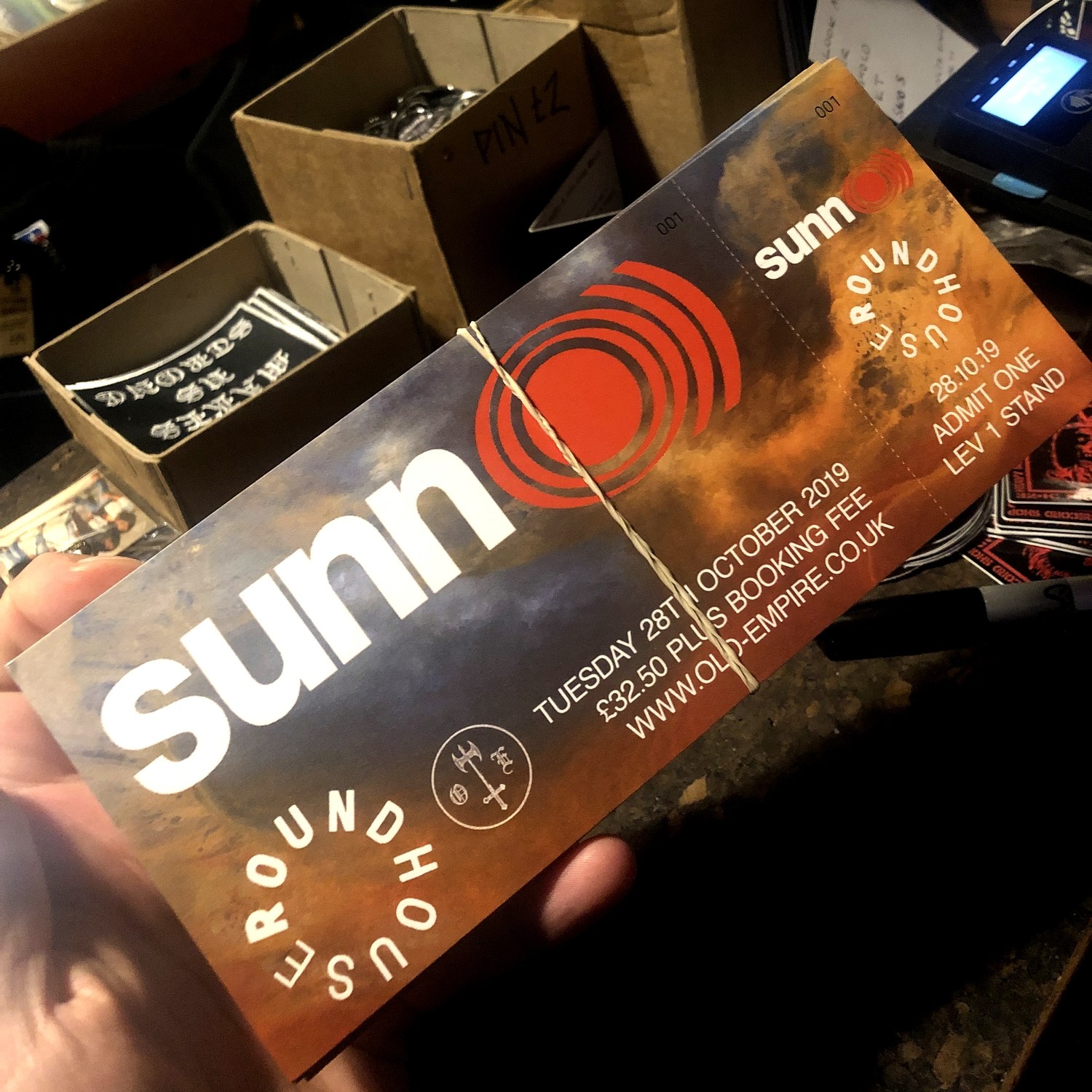 At the very beginning of 2018 Sunn O))) co-founders Stephen O’Malley & Greg Anderson set out on a path toward a new album production. They were both determined to create new music and a new method of working in the studio, without forgetting the long and proud history of production and studio accomplishments forged during their first two decades of existence (and the members’ own musical experiences out of the band’s). One long term goal was completely clear: to record Sunn O))) with Steve Albini in his Electrical Audio studio. Steve took the call, said “Sure, this will be fun. I have no idea what is going to happen.”

Greg and Stephen gathered twice that spring for writing, conceptualising and riff woodshedding in the very building where the band was formed: Downtown Rehearsal in Los Angeles. Sonic cosmoses, flashes of abstract colour (synthetic and objective) and themes emerged from the mastered depths of saturation and circuits between the two players and their mountains of gear. Themes developed in terms of brightness and energy, while visionary cues pointed toward subconscious areas of practice and the pair realised they were exploring other zones of consciousness via sound/time and sound/energy manipulation. In early summer a pre-production session with full backline, as a trio with T.O.S. on Moog, was recorded at Dave Grohl’s 606 studios, Northridge, California.

In July 2018 Sunn O))) spent just over two weeks in Chicago at Electrical Audio (Studio A) with Steve Albini at the helm. The results are astounding: there is breadth and luminosity of colour, it sounds vast. The sessions were impeccably recorded, authentically represented and completely accurate. The spectrum cracked the firmament open in clarity. An all analogue technique was used, they recorded and mixed on tape, providing a creative gateway for Sunn O))) to evolve their production methods into stronger, confident, performance based and a more logical executive process. The album was mastered and lacquers cut from tape in October by Sunn O))) ally Matt Colton at Alchemy in London. The LP version is a AAA album, recorded and mixed on tape via a completely analogue production, from the input of the band’s amplifiers and the air coming off the speakers in front of the microphones to the needle touching the pressed vinyl on your turntable.

Continuing one of the main currents of the Sunn O))) concept, depth of exploration within collaboration, brought forth Hildur Guðnadóttir to the Sunn O))) constellation. Hildur is a sometime live collaborator of Sunn O))) and a renowned film music composer, former member of the bands Múm, Pan Sonic and Angel. She was a long time collaborator with the composer Jóhann Jóhannsson (RIP). Hildur lent her incredible attitude, as well as her voice, breath and electric cello, and the enigmatic haldorophone to the proceedings, culminating in the epic composition/concerto “Novæ”. The cosmos clearly expands.

Tim Midyett, a close friend of Greg and Stephen since the Seattle days of the early 90s (and member of Silkworm, Bottomless Pit and Mint Mile), joined in a foundational role tying earth to sound with wicked performances on aluminium neck bass and baritone guitars: instruments he helped pioneer playing back in the 90s (alongside Steve and Shellac of course). Dark matter is reality.

The resulting album is titled Life Metal. It is fully realised and completely real. The record was produced by the core of Stephen & Greg & arranged by the greater constellation Sunn O))). Paintings by visual artist Samantha Keely Smith graciously adorn the sleeve and provide a perfect suitable mask to the proceedings. They collide ideas of 19th century romanticism & late 20th abstract expressionism (mysticism) with Sunn O)))’s approach to metal (via reference points of Arbo, Turner, Delville, Richter, Turrel, Wou-Ki). Photographer Ronald Dick shot them in baths of light colour representing depth of sound pressure in the work.

Your personal details will be shared with The Roundhouse for the purposes of ticket fulfilment and customer support only. For more details on their piracy policy please click here https://www.roundhouse.org.uk/home/terms-and-conditions/#privacy