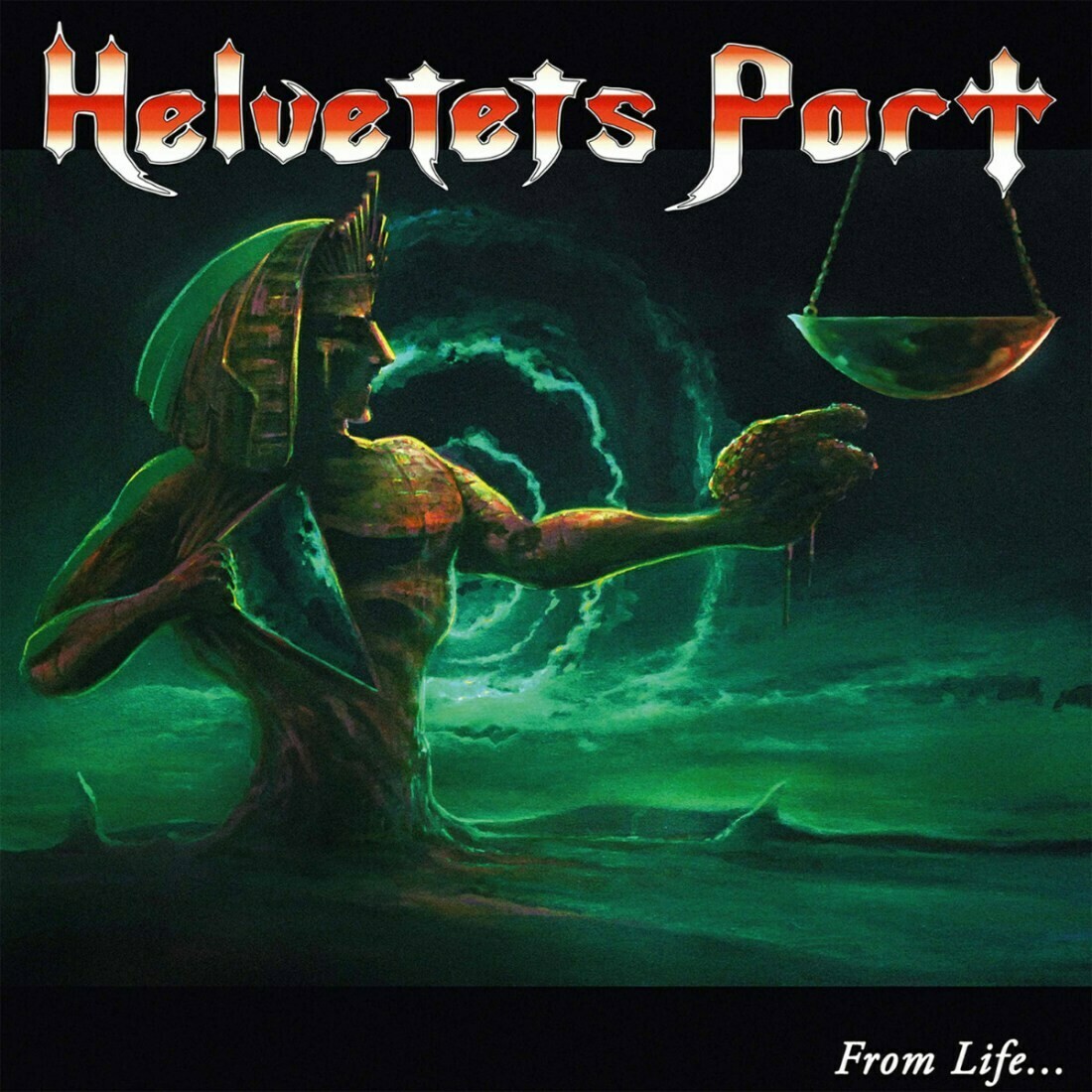 Helvetets Port - From Life To Death

It’s been a while. »Exodus To Hell«, Helvetets Port’s debut album, was issued in 2009, the 12” EP »Man With The Chains« a year later. Almost a decade on, Gothenburg’s finest are about to issue their second album »From Life To Death« on High Roller Records.
Lead singer Witchfinder explains the long gap between the two records: “The last show before the hiatus was in December 2011, and then we got going again in 2014. So in reality the break wasn't super long, even though it seems that way given the time between releases. The band was never officially over, but I guess we kind of needed a break and then a fresh start. I think having a break serves as a reminder later on that you really don't want to not be playing heavy metal.” Not surprisingly, in the interim between 2010 and 2019 there have been a few line-up changes: “Yes, in 2015 Virgin Killer joined on guitar, and Witchfinder started doing vocals only. Then in 2018 Inquisitor quit the band and Earthquake took over on bass.”
If you compare the 14 songs on »From Life To Death« with the band’s debut »Exodus To Hell«, the difference couldn’t be more evident: Helvetets Port in 2019 is a much more accomplished band. Singer Witchfinder explains in more detail: “When we got back together again in 2014, we started gathering some material for an album and began writing some new stuff. Two of the songs were written around 2008 and there are some old parts used for other songs; one riff is even older than anything we have released previously. Although most of the material was written around 2014-2016. It's kind of a wrapping up of our entire career thus far. We also wanted to make a really vast presentation since we've been away for so long. We've spent a lot more time with the recording and have grown as musicians this time around, and also got some new talent in the band.”
Musically it's also a much more adventurous and more versatile record. Will the fans cherish Helvetets Port’s new approach? Witchfinder thinks so: “The wonderful thing about classic 80s heavy metal, narrowed-down as the words may seem, is that it can have so many different facets and still not stray from the path. As long as you are into the genre, you find that it's very versatile. And with a profound understanding of it, you can branch out and never lose the spirit.”
Does the new album have some kind of an underlying (lyrical and/or musical) concept at all then? “One might say that lyrically, there's no real underlying theme,” reflects Helvetets Port’s vocalist. “However, musically it's toward the medieval, epic style so to speak, which inevitably also reflects in much of the lyrics. And visually as you can see it's an Egyptian theme, which also applies to a couple of the songs.”
Are Helvetets Port influenced first and foremost by home grown Swedish bands, obscure Swedish bands? For example by the original early 1980s Grave, who put out only one 7” single (sounding a bit like the Swedish Deep Purple). And there is also a band called Neon Rose, who recorded several damned heavy hard rock albums from the mid-70s on … Witchfinder tries to explain: “The basic influences are bands like Gotham City and Heavy Load, when it comes to the general feeling of the music. At the same time you can say there's a plethora of different influences all converging into one big broad idea of what heavy metal can be all about. Sometimes you can also be influenced by a band that is really difficult to approximate. For example, I think a lot about both the bands called Tyrant from the UK, and Zone Zero from Sweden, although I've never written a song that sounds like them (to my knowledge).”
As the metal underground scene changed quite a bit between 2009 and 2019, what are Hevetets Port’s expectations regarding the new album? “The biggest change is that there are more 70s influences going around nowadays,” hits Witchfinder the nail right on the head. “But classic heavy metal has always been here to stay, and we're gonna make sure of it. We are virtually unmovable by the passage of time. We would have to live to be 500 years old before the concept of classic heavy metal is depleted. We have our own spirit/style and are confident that what we do is always permeated by it. With this album we expect to reassure these notions.”
When Helvetets Port originally started out, bands like RAM, Enforcer, Skull Fist, let alone High Spirits or Night Demon, did not even exist. So would it be fair to say that Helvetets Port were one of the originators of the return of traditional heavy metal in the second millennium? Witchfinder believes so: “At least from what I could gather there were no bands around the year 2000 that played the classic heavy metal style that adamantly. That was also a driving force behind starting the venture in the first place. Kind of: ‘This is the best music, why isn't anyone playing it? What are you guys THINKING?’ Although it took until 2005 for Helvetets Port material to be officially released. It's an honor to be considered part of the resurgence. Now that, as I said, heavy metal is here to stay, it's also an honor to be a part of its unbroken continuance.”